Here’s a site to help you should you feel anxious (normal), frustrated and … ____ or _____ – all those emotions are valid and many share them. Here you go Click Here:)

And also this site is helpful: www.tenpercent.com

Definitely check out your regular or your local yoga studio as we want to help your local businesses first. Maybe get a gift card there or prepaid card so that your neighborhood business can remain a going-concern. Just support them the best you can and that good will in return will yield boomerang effect on your community.

Physically I am doing just fine – BUT after listening to President Trump lash out at a very fine journalist, Peter Alexander, I just felt terrible and hoped that no children or no young adults heard this bully. Instead of providing words of comfort and reassurance, he went into vicious rant. It was SOOOOO sad to hear. My heart sank to realize that – that’s the leadership we have – someone who instead of listening to experts, scientist and medical community from the onset, who intentionally (for Dow Jones numbers) downplayed it, thus squandering the one month lead time we had for containment. Peter Alexander actually gave the President opportunity to say something inspirational, epic, opportunity for powerful words that could have been remembered in history for generations to come. But he instead showed rage and attacked a very well respected competent and well meaning journalist who is of top notch caliber. I was so shocked and sick to my stomach. So friends, it’s not the virus but this leader who has these press conference just to praise himself is really … sickening.

If you don’t know what I am talking about – Just search for Peter Alexander and maybe the exchange would come up – it was reported on CNN etc. (Oh, didn’t know he’s from Oakland, CA !!! He’s Californian! )

Those press conference should not be “political” or time to be placing a blame on one country or actually, one ethnicity or be a platform to again and again congratulate self – it’s so childish. Just be a real leader – Reassure – restore faith and trust – nice to be upbeat or positive but not at the expense of public safety and putting down journalists who are doing their life work to inform us. It was pretty vicious – I had new found respect for journalists – they are so brave.

In stark contract, it could have been like this – So this is how it’s so different had he spoke this kind of words:

This great Nation will endure as it has endured, will revive and will prosper. So, first of all, let me assert my firm belief that the only thing we have to fear is fear itself—nameless, unreasoning, unjustified terror which paralyzes needed efforts to convert retreat into advance.

Which great leader said this at times of great crisis that is said to happen about once every 100 years?

We need a-political, inspiring, compassionate, and empathetic compelling words of wisdom based on solid science at this time more than ever. 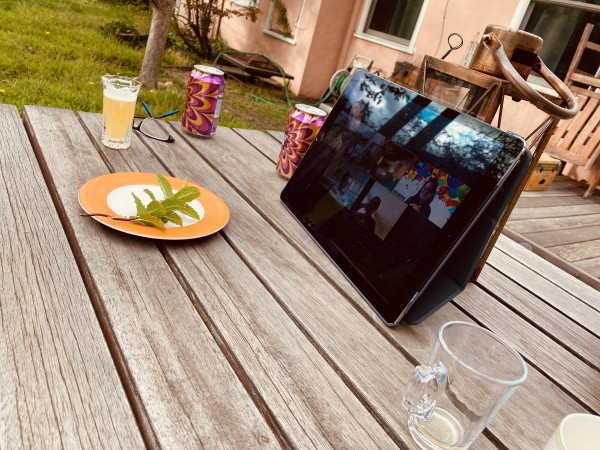 To celebrate a friend’s birthday… we each had a drink to share – remotely – while an unexpected FaceTime call joined with a greeting. It’s tough times for all, hardest part being the unknowns. We can feel the underlying tones of anxieties in each of us. In midst of the unknowns, all we have control over is our actions in how respond – to not be in despair but each doing our part to protect Self and those who you care about, the best you can.

Let’s call a friend or family members every day to check on them.